In thirty-nine years of marriage, Gerard and Jeannie Long have come to know and love God in a profound way. It’s this love that has enabled them to persevere through any parent’s worst nightmare and to now have even more love for Jesus Christ and for each other. 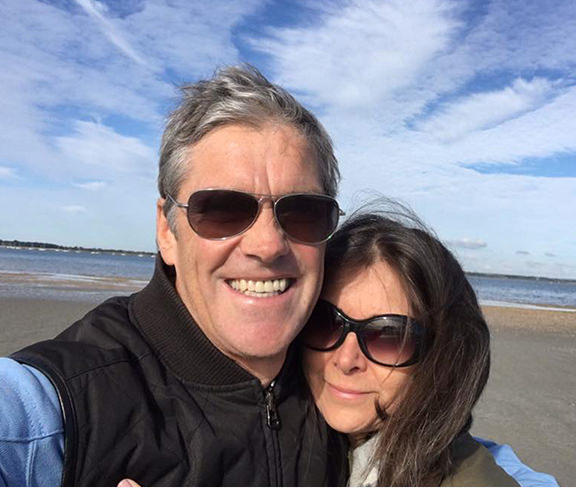 They’ve experienced success and wealth based on the values of the world and also the deepest grief and suffering resulting from the death of two of their three children. On their journey, God has revealed His grace and glory to them in extraordinary ways. In particular, they’ve experienced how God is able to redeem the most painful areas of our lives and turn them around for good. Gerard has developed a deep awareness of eternity and Jeannie has experienced God’s presence and glory when she was close to ending her own life. Their marriage has triumphed when all seemed lost and they’ve learned valuable lessons throughout their unbelievable journey. And they have a very clear message of God’s calling for each Christ follower to obey the Great Command and the Great Commission.

After a successful collegiate track career, Gerard earned a BS (with honors) in banking and finance and went to work for HSBC (on of the world’s largest banks), eventually rising to the office of senior vice president, corporate marketing. Jeannie was trained at the Royal Ballet School and danced professionally before starting her own ballet school in London.

A DRAMATIC ENCOUNTER WITH GOD

In 1980, Gerard had a dramatic encounter with God. Gerard and Jeannie married in 1981 and both felt called to serve in a church in North London where Gerard served as a pastor for 17 years. During this time, Gerard continued to work in the banking and finance industry and Jeannie stayed at home to raise their three children.

Gerard’s banking career took him around the world and included some fascinating roles, including director of the Year 2000 program for the UK and Europe. In 2001, they moved to New York, where Gerard was asked to launch a global product for HSBC, and then on to Chicago in 2003, where he led the integration of HSBC and Household International. Through out his banking career, Gerard sought to introduce his colleagues to Jesus Christ and while serving in the City of London he was Chairman of Christians in Finance (which was founded in 1875).

Shortly after saying to Jeannie in 2004, “Does it get any better than this?”, Gerard and Jeannie went through a period of intense brokenness following the suicide of their seventeen year old son Alex. Jeannie lost her faith for two years and, apart from God’s grace, their marriage would have failed. During this period, Gerard received a revelation of eternity which helped him to journey through a season of terrible pain and suffering. Through some supernatural touches from God, Jeannie came back to faith in Christ and they triumphed in their marriage.

At the end of 2006, Gerard retired from HSBC and joined Alpha USA — Alpha helps churches to make more disciples of Jesus Christ and it operates in more than 169 countries. More than 24 million people have experienced Alpha, including 3 million in the US. Gerard served as the CEO of Alpha USA for seven years, during which time the ministry grew by over 300%.

In 2014, another terrible tragedy struck when Gerard and Jeannie’s beautiful daughter, Rebecca, slipped and fell into the frigid waters of Lake Michigan and drowned. There are no words to describe the pain and the suffering that followed but, in the midst of it, God has fellowshipped with them and gave them a supernatural story of His grace and glory.

In obedience to an unequivocal call from God, Gerard resigned from Alpha at the end of 2014 and they’re now testifying to God’s amazing grace. In particular, sharing how God, through the Cross, can take the worst things that happen to us and, if we let Him, turn them for good as part of His eternal plan and purpose.